Dodecatheon meadia Album is a hardy perennial that likes a dampish place in semi shade, it’s elegant cyclamen like white flowers are held on strong stems over lance shaped lime green leaves. It comes into growth early in the year and can be damaged by late frosts, flowering from April onwards it will die back by August. 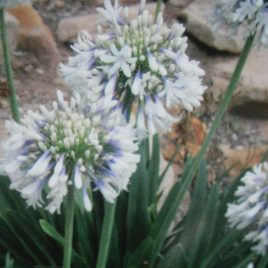 Blue trumpets edged in white on these flower heads give Queen mum it’s distinctive look, flowers can measure up to 23cms in diameter, a real whopper! Perfect for pots. Supplied in a 1.5ltr - 2ltr pot
not rated £9.95 Read more 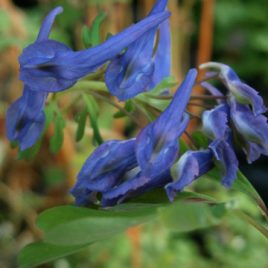 Corydalis 'Spinners' is a cross between Corydalis Elata and Corydalis Flexuosa it's delicate sky blue flowers are held above divided ferny foliage , happy in most soils alkaline to acid,  in sun or shade, as long as it doesn't dry out! after flowering in the spring and early Summer Corydalis 'Spinners' will go dormant until the Winter when it starts to reappear. Plants are supplied bare root December - February . 9cm pot March onwards. If plants are sent when in full growth it may be necessary to cut them back for postage.
not rated £5.95 Add to basket 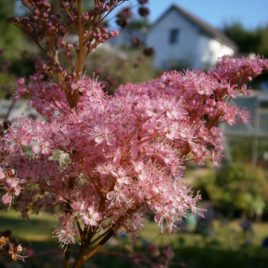 Filipendula rubra 'Venusta' is a big , bold plant that likes a damp site in sun or shade. It's flower buds are deep pink, almost red and open to reveal frothy sprays of dark pink blooms. The stems are strong no staking is needed, no disease problems either and ..... they're slug proof too! They look great at the back of a border or at a pond edge where they will form a strong clump that can be divided in the winter.
not rated £5.95 Add to basket 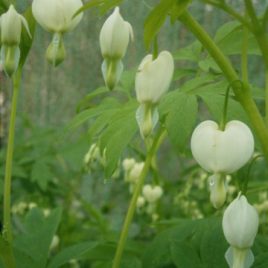 Dicentra Spectabalis Alba / Lamprocapnos spectabalis alba is a hardy perennial that flowers early in the Spring, it's fresh, light green ferny foliage appears in early April or earlier if you're in a sheltered area. The arching rows of white hearts are well in flower by mid April and last until July, Although Dicentra spectabalis Alba is fantastic in the shade where it's white hearts glisten from the gloom, I have grown it in full sun here in damp west Wales and it has been very happy! Although this is a tough plant it does tend to have brittle stems that aren't suited to a very exposed , windy site, but most average garden conditions suit it and it will reward you with a good sized clump. Plants are supplied in a 9cm pot.
not rated £5.50 Add to basket